Setting up Websockets with a separate API and client can be pretty tricky. By the end of this article, you'll be able to listen for realtime events fired from your Laravel app, in Nuxt.

If you need to authenticate on private channels, there's a course on Codecourse that'll guide you through that.

Even if you've got a Laravel project ready to go, I'd recommend starting fresh to avoid anything you've done already getting in the way.

Switch your database configuration over and migrate.

Open this in your browser with the localhost domain. When we set our Nuxt project up, we'll use the same domain (this is important).

Publish the migration for websocket statistics, and migrate.

We're not going to be touching the configuration file for this package, but let's publish it anyway.

Because we're using Laravel Websockets as a Pusher replacement, we'll also need to pull in the Pusher PHP SDK.

Head over to .env and switch the BROADCAST_DRIVER to pusher.

While we're in .env, we'll set an app ID, key and secret for Pusher. These are what we'd normally use to connect to Pusher, but since we're replacing Pusher with the Laravel Websockets package, any values will work here for local development.

For basic usage, that's pretty much it! Let's run the websocket server and make sure we can access the statistics dashboard.

Making sure you still have php artisan serve running from earlier, open the websocket dashboard in your browser. This is found at http://localhost:8000/laravel-websockets.

Hit the Connect button, and you should see something like this. 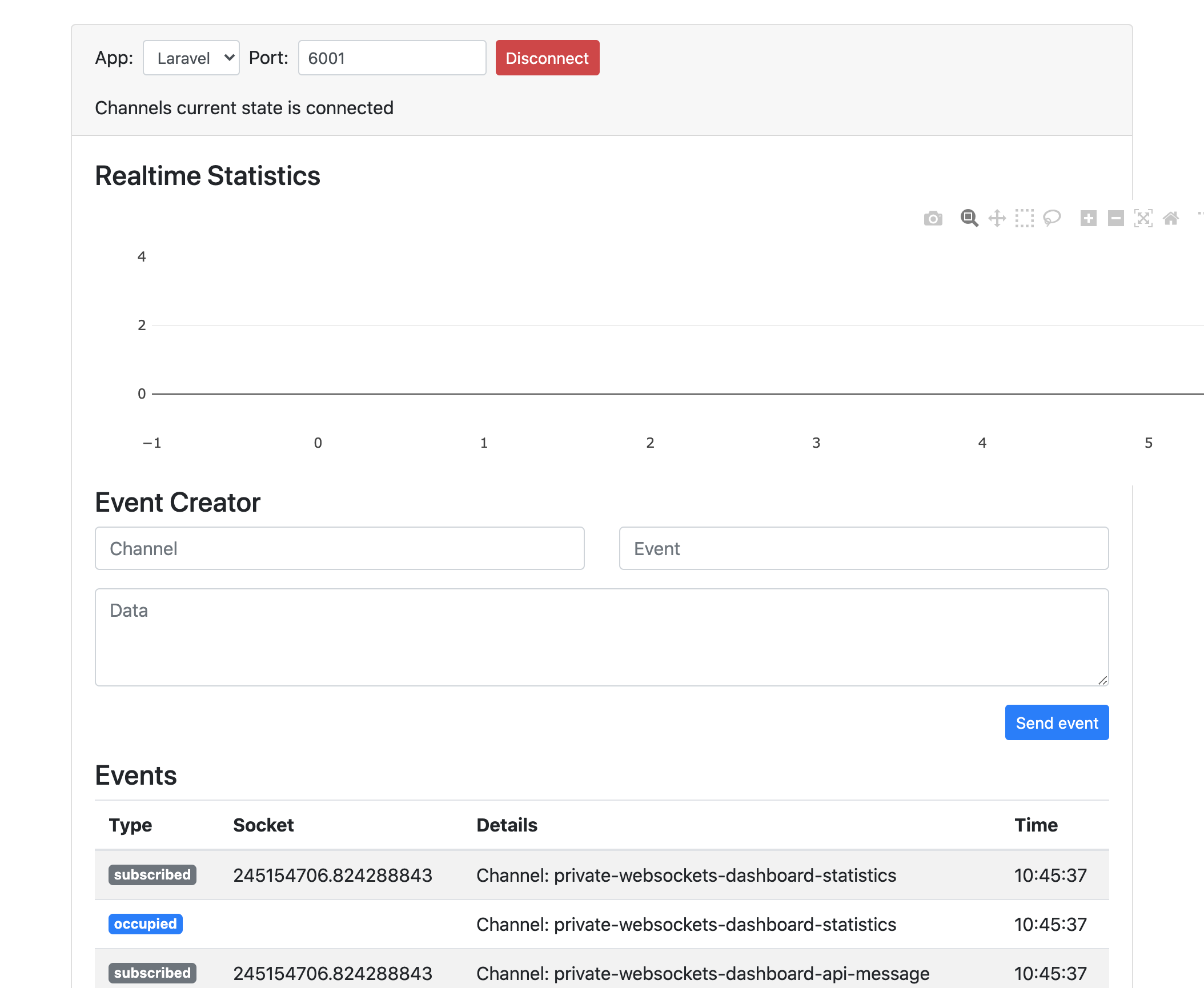 If that's working, your websocket server is configured properly, and we can test dispatching an event.

To test we're seeing events roll into the websocket dashboard (and eventually in our Nuxt app), let's create a really simple event.

Open this up, and implement the ShouldBroadcast interface.

Because we're only covering public channels here, change the broadcastOn method to look like this.

Now head over to your routes/web.php file and add the following route, to broadcast the new event we've created.

Tip: Instead of registering a route, you can also just run the broadcast code in php artisan tinker, or Tinkerwell if you have it.

Ok, let's test that our event is being broadcast!

If that's working, you're ready to get a fresh Nuxt project set up to listen for events.

Again, if you already have a Nuxt app ready to go, I'd recommend creating a fresh one just to test this stuff out.

Run through the installation steps as you need. There's nothing specific you'll need to choose here for the purpose of getting websockets connected.

Once Nuxt has been installed, serve it.

Open it up in your browser, making sure you use the localhost domain so it matches the API.

If you've worked with broadcasting in a Laravel app before, you've likely used Laravel Echo.

Normally we'd attach this to the browser window object, but we'll create a Nuxt plugin so we can use this easily in our Nuxt pages/components/store.

First up, we'll need to install Laravel Echo and the Pusher SDK for Javascript.

Now create an echo.js file under the plugins directory in Nuxt and add the following.

We're doing a few things here, so let's break it down.

Now we've created the plugin, we'll register it in nuxt.config.js

Notice we're setting the mode to client. This ensures it's not used on the server-side of Nuxt (It just wouldn't work, because we're accessing window in our plugin).

You've now created the plugin to listen to events from the websocket server. Let's actually use it!

Let's use the default index.vue page in Nuxt to start listening. First up, clear it out so it looks like this.

Once the page component has mounted, we can now use our injected Echo instance to listen on a specific channel, to a specific event.

And, that's it! Open up your Nuxt app homepage in the browser and separately visit http://localhost:8000/broadcast to broadcast the PostCreated event.

You should see the details for the event logged out to the console.

At the moment we don't have any data attached to this event, so it's just an empty array. Once you start adding public properties to the PostCreated event, they'll appear in this payload.

You're now successfully listening to broadcasted events. There's a slight issue we'll need to resolve, though.

It's likely you'll allow your users to navigate to different pages in your Nuxt app. As users navigate back and forth between pages that are listening on a websocket channel, we'll actually connect more than once.

To solve this, we'll *leave *the posts channel whenever we navigate away from the index.vue page. If you're listening to events from components in your Nuxt app, the same solution applies.

Update the index.vue page with the following.

This uses Echo to leave the posts channel when the component (in this case, a page) is destroyed, so we're now disconnecting and reconnecting whenever we navigate away from and back to a page.

If this feels weird or wasteful to disconnect and reconnect every time, consider how this would work in a non-SPA (single page application) site. It would do the same!

From start to finish, this guide got you set up with broadcasting and listening to events on public channels with Laravel Websockets and Nuxt.

I've covered authenticating on private channels in the Laravel Websockets with Nuxt course over on Codecourse.